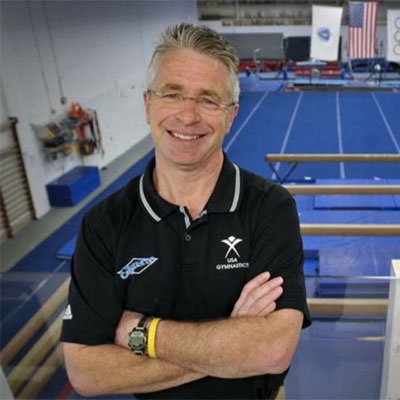 After a rather lackluster career as a high school gymnast, Paul started part-time at Gigueres in 1979 while attending UMass/Amherst, and went directly into coaching full-time upon graduation with his BS in P.E. Serving as Team Director, Head Coach, and Preschool Program Director, David Giguere and he purchased the gym in 1988; subsequently tripling the size of the facility and opening Discovery Schoolhouse. He has received recognition for helping coach hundreds of athletes to State, Regional, National, and Collegiate prominence in the Women’s, Men’s, and Trampoline disciplines of USA Gymnastics.

Since retiring as MassUSAG State and School Committee Chair, he mentors entrepreneurs, volunteers within his community, coaches the Boys Team here at Gigueres, and enjoys getting beat at golf by his adult son.